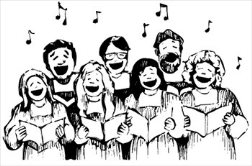 Those at the Parish Assembly would have noted that Mt Lion Neighbourhood proposed Recessionals (leaving hymn….ed) be part of the Mass. At the Liturgy Meeting on Tuesday night, it was discussed and decided that an uplifting instrumental piece be used at the end of each Mass. This will be reviewed at our next meeting.

In the Roman Rite of Mass the ﬁnal hymn is not mentioned neither in the Missal or the General Instruction. It is an accretion which was added when the ‘four-hymn sandwich’ was introduced as way of encouraging people to sing at Mass in the vernacular when there was not other material to enable the singing of the liturgy itself.
Experience shapes expectations. We tend to believe that what we have done is right and that we cannot imagine alternatives. But having already been fed by word and sacrament, is there in fact need for a further song before we give ourselves to our mission to love and serve the Lord?
What might happen?
The ﬁnal song of the Mass, according to the Missal, is the song of thanksgiving after communion. After everyone responds ‘Thanks be to God’ to the dismissal they process out, perhaps to joyful instrumental music, led by priest and ministers. There is chance to talk to one another outside before beginning a new week strengthened by word and Eucharist.
What are the advantages and disadvantages of a ﬁnal hymn?
For: we are used to it; it rounds things off nicely. It gives another opportunity for picking up the themes we have identiﬁed. It covers the procession. We enjoy it.

Against: it prevents us responding immediately in both words and action to the dismissal. It is padding. Half the congregation have left anyway.

What might we do?
It would be a real challenge for many parishes to move from a ﬁnal hymn to a procession out together. Like many changes it would require cooperation of the priest and other ministers together with careful preparation, and catechesis. It would be important to respect that some members of assembly may wish to stay where they are.
As mentioned above it is an ideal opportunity for music from an organ or other instruments. The other possibility is to sing a short song or chant. Like singing in the communion procession whatever is sung should not need books or sheets.